Beer Bread with Bacon and Chives (did I mention the bacon?) 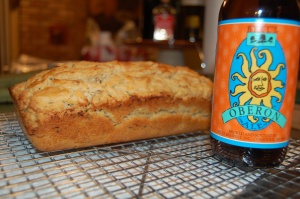 July is Craft Beer Month here in the state of Michigan, so to honor this wonderful month I wanted to make some Beer Bread.  Did you ever want a nice loaf of bread but didn’t want to deal with the hassle?  It’s a pretty involved process — proofing the yeast, mixing and kneading the dough, letting the dough rise, letting the dough rise again, and whatnot.  Don’t get me wrong, making a nice bread from scratch is something to be proud of.  Not a lot of people can do it well.  But what about the rest of us?  That’s why I like this recipe.  It is one of the easiest recipes that I know, and plus it involves beer!  Well, at least the base recipe is very simple; just take out the butter, chives, and bacon.  But come on — it’s butter and bacon!

So let’s talk about beer for just a second.  I only have a couple of summer favorites — 1) Old Speckled Hen from Suffolk, England, 2) San Miguel from the Philippines, 3) the fabulous Allagash White from Portland, ME, 4) Newcastle from Scotland (I think), and 5) a Michigan beer from Bell’s brewery called Oberon.  Oberon has kind of a cult following with some pubs and fans celebrating when the first batches come out for the year.  I used to have a calendar that marked the “opening days” of all their beers.  Not sure where it went though.  But I luv Oberon; nothing goes better with Michigan summers than a slice of orange and an ice-cold glass of Oberon!

But back to the bread.  This is a fairly hearty bread.  It can hold its own against bigger flavors, but you don’t necessarily want a competition for your attention.  This is great just on its own.  Maybe put a couple of slices in the broiler or toaster for a couple of seconds and you should be all set.  Here’s what you need:

1.  Preheat your oven to 350 degrees.  Spray a 9-in loaf pan with cooking spray and set aside.

2.  Put all the ingredients except the butter together in a bowl.  Using a wooden spoon, mix the batter well, until combined.  The mixture will be very thick and sticky.

3.  Transfer the dough to the loaf pan and pour the melted butter on top.  Bake for about 1 hr and 15 minutes, until nicely browned on the top.

4.  Turn out onto a wire rack to cool.  If done correctly, the bread will be pretty dense and crusty. 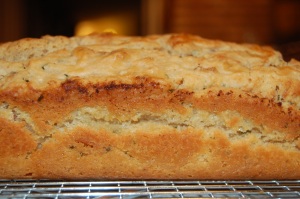 Notes — You can try a whole bunch of different herbs in this one.  I just use chives because I have them growing out back. . . Also try a whole bunch of different beers and ales.  Guinness makes a wonderful beer bread as does a Sam Adams Cranberry Lambic. . . Like I said above, take out the butter, bacon, and chives (not that you would) and you have the base recipe.  You can take the base and modify it as you like. . . maybe a little cheese on top because butter and bacon apparently isn’t enough. . . PS — the ends are the best cuz those slices have the most crust, which has been surrounded by butter for over an hour!  Look, I never said that this was healthy. . .

7 thoughts on “Beer Bread with Bacon and Chives (did I mention the bacon?)”

Oh, my that looks awesome! Bacon and beer, perfect.

Hi, thank you for liking my recent post. I see we started blogging at around the same time, continued success with Jereme’s Kitchen…B from Just Add Attitude

thanks for the visit! hope we can both keep up the postings!

thanks for stopping by! i luv this recipe cuz you get some big flavors for relatively little work!

Wow, this looks delicious! Sorry it took me a little while to check it out but I will definitely have to try it soon!

i’m glad you found the recipe! it’s an easy one to try and i luv beer bread