Nothing says “Happy Birthday America” like a Gooseberry Grunt.  Gooseberries are native to North America, but there are also species with origins in Europe, Asia, and Africa.  They are closely related to currants and can have cross varieties between the two.  I found a University of Minnesota article with some info about both.  It has useful info on how to grow and harvest them.

As for grunts, they are one of the many types of cobblers.  I could do a whole series of stuff on different types of cobblers, but you’d probably not get 100% consensus about how to define all the different varieties.  Sometimes referred to as slumps, grunts get their name by the sound they make as they cook.  Traditionally cooked on the stovetop , the dough or crust is basically a steamed dumpling.  You use a biscuity type dough for this type of cobbler.  This recipe was baked in the oven so it probably should be called a slump, but alliteration-wise “Gooseberry Grunt” sounded better.  Which is probably why “American as Apple Pie” was more popular than “American as Gooseberry Grunt”.

This dessert has its roots in colonial New England.  I remember reading somewhere that grunts were from Massachusetts and the everywhere else in New England called them slumps.  These were attempts to recreate the steamed pudding that could find in their home country of England.  Of course, they could only use the fruits that they could find locally.  Yay! — another cultural / historical nugget!

Anyhoo, back to the recipe.  There were some raspberries mixed in so this isn’t just gooseberries.  The flavor of the gooseberry is on the tart side, but there is some sweetness there.  It’s kinda hard to really describe the flavor since it is so unique.  The texture is close to that of a grape.  There is a pic on Wikipedia showing a sliced gooseberry.  There’s also info available at the site, but you can never trust Wikipedia 100% since anyone can change the info.  But I digress. . .

Here’s what you need: 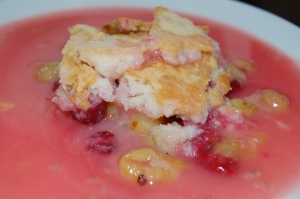 2.  In a mixing bowl cream together the butter and 1/2 the sugar until fluffy.  Alternating with the half the milk, add the flour in thirds so that you start and end with the flour (hope that isn’t confusing because I can never figure out how to state that clearly).  Spoon the batter over the berries.

3.  Mix together the remaining sugar with the cornstarch and nutmeg.  Sprinkle over the top.  Pour the boiling water over everything.

4.  Bake for 1 hour.  Cool for about 15 minutes before serving so that it can set.  You can serve with ice cream or whipped cream or Cool Whip.

I don’t see gooseberries down here, but wish I did. I think this is just the best name for a dish too!

From what I understand gooseberries are difficult to cultivate. I guess they’ve had some success in the Great Lakes area and in New England. If you ever come across them you should definitely try them!