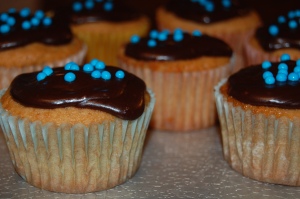 So it’s National Iced Tea Month.  And I understand that this is a cupcake recipe, but it’s got chai in it, so that’s close.  Just have a glass of an iced beverage when you have a cupcake.  You just won’t have “ice” and “tea” incorporated into a single item.  But, in my opinion, it’s really hard to come up with an interesting recipe for iced tea that doesn’t involve Long Island.  Maybe I could post a sun tea recipe. . .

Anyhoo, back to the cupcakes.  I use an instant chai mix to add the flavor and color to a nice cupcake recipe.  I did also add a little bit of whole wheat flour to add some additional color, texture, and flavor.  The instant chai is also used in the glaze by dissolving it in the heated cream before adding the chocolate to it to make the glaze.  This makes about 2 dozen standard-sized cupcakes.  Here’s what you need: 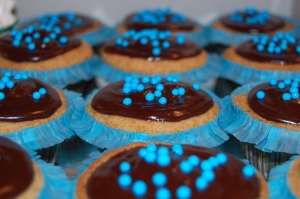 2.  Sift together the flours, salt, and baking powder into a medium-sized bowl.  In a measuring cup, dissolve the chai into the milk and set aside.

3.  In the bowl of a mixer, beat the butter until light.  Gradually add the sugar and mix until fluffy, about 3 – 5 minutes.  Add the eggs one at a time, mixing well after each addition.  Then add the vanilla and combine.

4.  In three additions, add the flour mixture, alternating with half of the chai mixture.  Mix until just blended, being careful to not overmix!

5.  Fill the cupcake liners about 2/3 full.  Bake for about 30 minutes, or until set in the middle.  Cool in the pans for about 20 minutes before removing them.  Cool completely on wire racks before glazing.

1.  In a double boiler, combine the cream and chai, making sure the chai is dissolved.

2.  Add the chocolate, and stir until melted.  Remove from the double boiler and allow to cool slightly.  Use a spoon to dollop on a bit of the ganache onto the cooled cupcakes.

Notes — I liked the finished product, but there are a couple of things that I want to try:  (1) I might try to use cake flour instead the AP flour; (2) maybe use three eggs instead of two; (3)  might also try using the “one-bowl” method instead of creaming.  That method is supposed to reduce the gluten that is formed, which is important to consider when using whole wheat flour.  In theory, you should be able to substitute up to 1/2 of the flour in a recipe without changing too much, but there are differences between AP (all-purpose) and whole wheat flours to consider (like moisture content).  So you may need to tweak things a bit.