What’s wrong with brunch?  Nothin’ I tell ya’!  I love a lazy Sunday brunch.  Now this past Sunday brunch was lazier than usual in the fact that it started at around 12:15 pm.  I 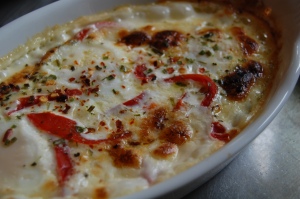 guess you can’t really call it brunch anymore if it’s that late.  But again it’s a lazy Sunday.  Which is why I try to keep brunches very simple.  And it is the only meal where I allow any kind of meal from a box.  Take waffles and pancakes for example.  I know how to make them from scratch, and if I am motivated enough to do it (or if I am doing some type of early morning entertaining), I will make them from scratch.  But (for the third and hopefully final time) it’s lazy Sunday!  And that’s why I love my giant bag of Krusteaz in my pantry.  Just add some eggs and butter and *poof!* you’ve got a whole bunch of waffley or pancakey goodness.  And if you want to make it extra fancy, just add some fruit to the mix.  Or even chocolate chips.  Williams-Sonoma always has some very nice waffle mixes and there’s probably a store not too far from you.  I also love stuff from Stonewall Kitchen, but that might be a little bit more difficult to find.  I especially love their jams like the Peach Amaretto or Wild Maine Blueberry.

But I digress. . . Back to the recipe!  Now this is a nice traditional French dish.  Sometimes called shirred eggs, it’s hearty and rustic, plus it’s simple and quick to make.  Now there are a bunch of recipes out there.  Some have a little bit of cheese, some have some wedges of tomato, some have just some herbs, and some are pretty much a quiche with no crust, leaving the eggs unscrambled.  I added some slivers of roasted peppers to just add some different flavors and textures, but they can certainly be omitted.  To make it even more Provencal, I had initially wanted to add some lavender, but I was overruled.  So in with the peppers.

For whatever reason, I don’t make Baked Eggs all that much, but I like the recipe so much that I bought 2 baking dishes specifically for this.  Good thing I can use those dishes for other things.  Now this is nice to serve with toast, probably a good sourdough or wheat bread.  I had some leftover biscuits that I had as a side.  It’s good to have something to help sop up all the liquidy deliciousness left from the eggs, cream, and butter.  You’ll need a small type of ramekin or some other similar type of baking dish.  It will need to be shallow so that the heat can surround the eggs.  This is especially important since the dish will be in the oven for a total of about 10 minutes, with the eggs being in there for maybe 5 of those minutes.

Here’s a single serving recipe.  Here’s what you need:

1.  Set the top rack in the oven to about a 8 inches or so from the heating element.  This will probably be the second highest level in the oven.  Turn the broiler in the oven to high.  Leave the oven on for a couple of minutes to get everything to temperature.

2.  Place the cream and butter in the baking dish.  Place in the preheated oven for about 5 minutes, until bubbly and somewhat browned.  Doing this step helps ensure everything cooks evenly.  Now while the cream is heating in the oven, crack the eggs into a measuring cup or some other vessel that can facilitate easy pouring.  It is important to minimize the amount of time the dishes are out of the oven.

3.  When the cream is ready, remove the dish from the oven and add the eggs.  Season with the herbes de Provence, red pepper flakes, salt, and pepper.  Add the roasted peppers and return to the oven under the broiler.

4.  Cook for another 4-7 minutes, until desired doneness.  The less time it is in the oven, the runnier the yolk will be.  Usually leave it in the oven until the whites are almost set.  Remove from the oven and let it sit for about a minute to let it set.  Like with scrambled eggs, they still continue to cook while out of the oven.  After the minute is up, it’s then ready to serve!

One thought on “Baked Eggs with Roasted Peppers”